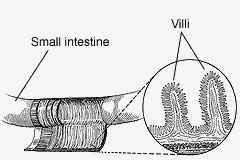 Because the body’s own immune system causes the damage, celiac disease is considered an autoimmune disorder. However, it is also classified as a disease of malabsorption because nutrients are not absorbed. Celiac disease is also known as celiac sprue, nontropical sprue, and gluten-sensitive enteropathy.

Celiac disease is a genetic disease, meaning that it runs in families. Sometimes the disease is triggered–or becomes active for the first time–after surgery, pregnancy, childbirth, viral infection, or severe emotional stress.

Celiac disease affects people differently. Some people develop symptoms as children, others as adults. One factor thought to play a role in when and how celiac appears is whether and how long a person was breastfed–the longer one was breastfed, the later symptoms of celiac disease appear and the more atypical the symptoms. Other factors include the age at which one began eating foods containing gluten and how much gluten is eaten.

Symptoms may or may not occur in the digestive system. For example, one person might have diarrhea and abdominal pain, while another person has irritability or depression. In fact, irritability is one of the most common symptoms in children.

Symptoms of celiac disease may include one or more of the following:

Anemia, delayed growth, and weight loss are signs of malnutrition–not getting enough nutrients. Malnutrition is a serious problem for anyone, but particularly for children because they need adequate nutrition to develop properly.

How is celiac disease diagnosed?

Diagnosing celiac disease can be difficult because some of its symptoms are similar to those of other diseases, including irritable bowel syndrome, Crohn’s disease, ulcerative colitis, diverticulosis, intestinal infections, chronic fatigue syndrome, and depression.

Recently, researchers discovered that people with celiac disease have higher than normal levels of certain antibodies in their blood. Antibodies are produced by the immune system in response to substances that the body perceives to be threatening. To diagnose celiac disease, physicians test blood to measure levels of antibodies to endomysium and tissue transglutaminase.

Screening for celiac disease involves testing asymptomatic people for the antibodies (see above). Americans are not routinely screened for celiac disease. However, because celiac disease is hereditary, family members–particularly first-degree relatives–of people who have been diagnosed may need to be tested for the disease. About 10 percent of an affected person’s first-degree relatives (parents, siblings, or children) will also have the disease. The longer a person goes undiagnosed and untreated, the greater the chance of developing malnutrition and other complications.

What is the treatment?

The only treatment for celiac disease is to follow a gluten-free diet–that is, to avoid all foods that contain gluten. For most people, following this diet will stop symptoms, heal existing intestinal damage, and prevent further damage. Improvements begin within days of starting the diet, and the small intestine is usually completely healed–meaning the villi are intact and working–in 3 to 6 months. (It may take up to 2 years for older adults.)

The gluten-free diet is a lifetime requirement. Eating any gluten, no matter how small an amount, can damage the intestine. This is true for anyone with the disease, including people who do not have noticeable symptoms. Depending on a person’s age at diagnosis, some problems, such as delayed growth and tooth discoloration, may not improve.

A small percentage of people with celiac disease do not improve on the gluten-free diet. These people often have severely damaged intestines that cannot heal even after they eliminate gluten from their diet. Because their intestines are not absorbing enough nutrients, they may need to receive intravenous nutrition supplements. Drug treatments are being evaluated for unresponsive celiac disease. These patients may need to be evaluated for complications of the disease.

A gluten-free diet means avoiding all foods that contain wheat (including spelt, triticale, and kamut), rye, barley, and possibly oats–in other words, most grain, pasta, cereal, and many processed foods. Despite these restrictions, people with celiac disease can eat a well-balanced diet with a variety of foods, including bread and pasta. For example, instead of wheat flour, people can use potato, rice, soy, or bean flour. Or, they can buy gluten-free bread, pasta, and other products from special food companies.

Plain meat, fish, rice, fruits, and vegetables do not contain gluten, so people with celiac disease can eat as much of these foods as they like. Examples of foods that are safe to eat and those that are not are provided below.

The gluten-free diet is complicated. It requires a completely new approach to eating that affects a person’s entire life. People with celiac disease have to be extremely careful about what they buy for lunch at school or work, eat at cocktail parties, or grab from the refrigerator for a midnight snack. Eating out can be a challenge as the person with celiac disease learns to scrutinize the menu for foods with gluten and question the waiter or chef about possible hidden sources of gluten. Hidden sources of gluten include additives, preservatives, and stabilizers found in processed food, medicines, and mouthwash. If ingredients are not itemized, you may want to check with the manufacturer of the product. With practice, screening for gluten becomes second nature.

A dietitian, a health care professional who specializes in food and nutrition, can help people learn about their new diet. Also, support groups are particularly helpful for newly diagnosed people and their families as they learn to adjust to a new way of life.

The Gluten-Free Diet: Some Examples

Following are examples of foods that are allowed and those that should be avoided when eating gluten-free. Please note that this is not a complete list. People are encouraged to discuss gluten-free food choices with a physician or dietitian who specializes in celiac disease. Also, it is important to read all food ingredient lists carefully to make sure that the food does not contain gluten.

Substitutions for a Gluten-Free Diet

Grains are used in processing many foods, so read labels carefully. The following tips will help you to find “hidden gluten” on food labels:

Where to look for ‘Hidden Gluten’

This sample menu provides the following:

What are the complications of celiac disease?

Damage to the small intestine and the resulting problems with nutrient absorption put a person with celiac disease at risk for several diseases and health problems:

How common is celiac disease?

Celiac disease is the most common genetic disease in Europe. In Italy about 1 in 250 people and in Ireland about 1 in 300 people have celiac disease. It is rarely diagnosed in African, Chinese, and Japanese people.

More research is needed to find out the true prevalence of celiac disease among Americans.

People with celiac disease tend to have other autoimmune diseases as well, including

The connection between celiac and these diseases may be genetic.

Dermatitis herpetiformis (DH) is a severe itchy, blistering skin disease caused by gluten intolerance. DH is related to celiac disease since both are autoimmune disorders caused by gluten intolerance, but they are separate diseases. The rash usually occurs on the elbows, knees, and buttocks. Although people with DH do not usually have digestive symptoms, they often have the same intestinal damage as people with celiac disease. DH is diagnosed by a skin biopsy, which involves removing a tiny piece of skin near the rash and testing it for the IgA antibody. DH is treated with a gluten-free diet and medication to control the rash, such as dapsone or sulfapyridine. Drug treatment may last several years.

To learn more about this topic, visit: