Constipation is passage of small amounts of hard, dry bowel movements, usually fewer than three times a week. People who are constipated may find it difficult and painful to have a bowel movement. Other symptoms of constipation include feeling bloated, uncomfortable, and sluggish. 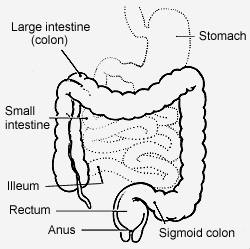 At one time or another, almost everyone gets constipated. Poor diet and lack of exercise are usually the causes. In most cases, constipation is temporary and not serious. Understanding its causes, prevention, and treatment will help most people find relief.

According to the 1996 National Health Interview Survey, about 3 million people in the United States have frequent constipation. Those reporting constipation most often are women and adults age 65 and over. Pregnant women may have constipation, and it is a common problem following childbirth or surgery.

Constipation is one of the most common gastrointestinal complaints in the United States, resulting in about 2 million doctor visits annually. However, most people treat themselves without seeking medical help, as is evident from the millions of dollars Americans spend on laxatives each year.

To understand constipation, it helps to know how the colon (large intestine) works. As food moves through the colon, it absorbs water while forming waste products, or stool. Muscle contractions in the colon push the stool toward the rectum. By the time stool reaches the rectum, it is solid because most of the water has been absorbed.

Not Enough Fiber in the Diet

The most common cause of constipation is a diet low in the fiber found in vegetables, fruits, and whole grains, and high in the fats found in cheese, eggs, and meats. People who eat plenty of high-fiber foods are less likely to become constipated.

Fiber–both soluble and insoluble–is the part of fruits, vegetables, and grains that the body cannot digest. Soluble fiber dissolves easily in water and takes on a soft, gel-like texture in the intestines. Insoluble fiber passes through the intestines almost unchanged. The bulk and soft texture of fiber help prevent hard, dry stools that are difficult to pass.

According to the National Center for Health Statistics, Americans eat an average of 5 to 14 grams of fiber daily,* short of the 20 to 35 grams recommended by the American Dietetic Association. Both children and adults eat too many refined and processed foods from which the natural fiber has been removed.

A low-fiber diet also plays a key role in constipation among older adults, who may lose interest in eating and choose convenience foods low in fiber. In addition, difficulties with chewing or swallowing may force older people to eat soft foods that are processed and low in fiber.

Learn more about a High-Fiber Diet.

Liquids like water and juice add fluid to the colon and bulk to stools, making bowel movements softer and easier to pass. People who have problems with constipation should drink enough of these liquids every day, about eight 8-ounce glasses. However, alcohol and liquids that contain caffeine, like coffee and cola drinks, have a dehydrating effect.

Lack of exercise can lead to constipation, although doctors do not know precisely why. For example, constipation often occurs after an accident or during an illness when one must stay in bed and cannot exercise.

Some medications can cause constipation. They include:

Some people with IBS, also known as spastic colon, have spasms in the colon that affect bowel movements. Constipation and diarrhea often alternate, and abdominal cramping, gassiness, and bloating are other common complaints. Although IBS can produce lifelong symptoms, it is not a life-threatening condition. It often worsens with stress, but there is no specific cause or anything unusual that the doctor can see in the colon.

Changes in Life or Routine

During pregnancy, women may be constipated because of hormonal changes or because the heavy uterus compresses the intestine. Aging may also affect bowel regularity because a slower metabolism results in less intestinal activity and muscle tone. In addition, people often become constipated when traveling because their normal diet and daily routines are disrupted.

Myths about constipation have led to a serious abuse of laxatives. This is common among people who are preoccupied with having a daily bowel movement.

Laxatives usually are not necessary and can be habit-forming. The colon begins to rely on laxatives to bring on bowel movements. Over time, laxatives can damage nerve cells in the colon and interfere with the colon’s natural ability to contract. For the same reason, regular use of enemas can also lead to a loss of normal bowel function.

Ignoring the Urge to Have a Bowel Movement

Diseases that cause constipation include neurological disorders, metabolic and endocrine disorders, and systemic conditions that affect organ systems. These disorders can slow the movement of stool through the colon, rectum, or anus.

Several kinds of diseases can cause constipation:

Problems with the Colon and Rectum

Colonic inertia and delayed transit are two types of functional constipation caused by decreased muscle activity in the colon. These syndromes may affect the entire colon or may be confined to the lower or sigmoid colon.

What diagnostic tests are used?

Most people with constipation do not need extensive testing and can be treated with changes in diet and exercise. For example, in young people with mild symptoms, a medical history and physical examination may be all the doctor needs to suggest successful treatment. The tests the doctor performs depend on the duration and severity of the constipation, the person’s age, and whether blood in stools, recent changes in bowel movements, or weight loss have occurred.

The doctor may ask a patient to describe his or her constipation, including duration of symptoms, frequency of bowel movements, consistency of stools, presence of blood in the stool, and toilet habits (how often and where one has bowel movements). A record of eating habits, medication, and level of physical activity or exercise will also help the doctor determine the cause of constipation.

The clinical definition of constipation is any two of the following symptoms for at least 12 weeks (not necessarily consecutive) in the previous 12 months:

Extensive testing usually is reserved for people with severe symptoms, for those with sudden changes in number and consistency of bowel movements or blood in the stool, and for older adults. Additional tests that may be used to evaluate constipation include:

Because of an increased risk of colorectal cancer in older adults, the doctor may use tests to rule out a diagnosis of cancer, including:

Colorectal transit study. This test, reserved for those with chronic constipation, shows how well food moves through the colon. The patient swallows capsules containing small markers that are visible on an x-ray. The movement of the markers through the colon is monitored with abdominal x rays taken several times 3 to 7 days after the capsule is swallowed. The patient follows a high-fiber diet during the course of this test.

Defecography is an x-ray of the anorectal area that evaluates completeness of stool elimination, identifies anorectal abnormalities, and evaluates rectal muscle contractions and relaxation. During the exam, the doctor fills the rectum with a soft paste that is the same consistency as stool. The patient sits on a toilet positioned inside an x-ray machine and then relaxes and squeezes the anus to expel the paste. The doctor studies the x-rays for anorectal problems that occurred as the paste was expelled.

Barium enema x-ray. This exam involves viewing the rectum, colon, and lower part of the small intestine to locate any problems. This part of the digestive tract is known as the bowel. This test may show intestinal obstruction and Hirschsprung’s disease, a lack of nerves within the colon.

The night before the test, bowel cleansing, also called bowel prep, is necessary to clear the lower digestive tract. The patient drinks a special liquid to flush out the bowel. A clean bowel is important, because even a small amount of stool in the colon can hide details and result in an incomplete exam.

Because the colon does not show up well on x-rays, the doctor fills it with barium, a chalky liquid that makes the area visible. Once the mixture coats the inside of colon and rectum, x-rays are taken that reveal their shape and condition. The patient may feel some abdominal cramping when the barium fills the colon, but usually feels little discomfort after the procedure. Stools may be a whitish color for a few days after the exam.

The patient usually has a liquid dinner the night before a sigmoidoscopy and takes an enema early the next morning. A light breakfast and a cleansing enema an hour before the test may also be necessary.

To perform a colonoscopy, the doctor uses a flexible tube with a light on the end called a colonoscope to view the entire colon. This tube is longer than a sigmoidoscope. The same bowel cleansing used for the barium x-ray is needed to clear the bowel of waste. The patient is lightly sedated before the exam. During the exam, the patient lies on his or her side and the doctor inserts the tube through the anus and rectum into the colon. If an abnormality is seen, the doctor can use the colonoscope to remove a small piece of tissue for examination (biopsy). The patient may feel gassy and bloated after the procedure. Learn more about a colonoscopy.

How is constipation treated?

Although treatment depends on the cause, severity, and duration, in most cases dietary and lifestyle changes will help relieve symptoms of constipation and help prevent it.

A diet with enough fiber (20 to 35 grams each day) helps form soft, bulky stool. A doctor or dietitian can help plan an appropriate diet. A high-fiber diet includes beans, whole grains and bran cereals, fresh fruits, and vegetables such as asparagus, brussels sprouts, cabbage, and carrots. For people prone to constipation, limiting foods that have little or no fiber, such as ice cream, cheese, meat, and processed foods, is also important.

Most people who are mildly constipated do not need laxatives. However, for those who have made diet and lifestyle changes and are still constipated, doctors may recommend laxatives or enemas for a limited time. These treatments can help retrain a chronically sluggish bowel. For children, short-term treatment with laxatives, along with retraining to establish regular bowel habits, also helps prevent constipation.

A doctor should determine when a patient needs a laxative and which form is best. Laxatives taken by mouth are available in liquid, tablet, gum, powder, and granule forms. They work in various ways:

People who are dependent on laxatives need to slowly stop using them. A doctor can assist in this process. In most people, this restores the colon’s natural ability to contract.

Treatment may be directed at a specific cause. For example, the doctor may recommend discontinuing medication or performing surgery to correct an anorectal problem such as rectal prolapse.

People with chronic constipation caused by anorectal dysfunction can use biofeedback to retrain the muscles that control release of bowel movements. Biofeedback involves using a sensor to monitor muscle activity that at the same time can be displayed on a computer screen, allowing for an accurate assessment of body functions. A health care professional uses this information to help the patient learn how to use these muscles.

Surgical removal of the colon may be an option for people with severe symptoms caused by colonic inertia. However, the benefits of this surgery must be weighed against possible complications, which include abdominal pain and diarrhea.

Can constipation be serious?

Constipation may also cause hard stool to pack the intestine and rectum so tightly that the normal pushing action of the colon is not enough to expel the stool. This condition, called fecal impaction, occurs most often in children and older adults. An impaction can be softened with mineral oil taken by mouth and by an enema. After softening the impaction, the doctor may break up and remove part of the hardened stool by inserting one or two fingers into the anus.