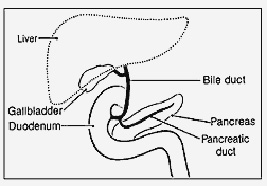 Acute pancreatitis occurs suddenly and lasts for a short period of time and usually resolves. Chronic pancreatitis does not resolve itself and results in a slow destruction of the pancreas. Either form can cause serious complications. In severe cases, bleeding, tissue damage, and infection may occur. Pseudocysts – accumulations of fluid and tissue debris – may also develop. And enzymes and toxins may enter the bloodstream, injuring the heart, lungs, and kidneys, or other organs.

Some people have more than one attack and recover completely after each, but acute pancreatitis can be a severe, life-threatening illness with many complications. About 80,000 cases occur in the United States each year; some 20 percent of them are severe. Acute pancreatitis occurs more often in men than women.

Acute pancreatitis is usually caused by gallstones or by drinking too much alcohol, but these aren’t the only causes. If alcohol use and gallstones are ruled out, other possible causes of pancreatitis should be carefully examined so that appropriate treatment – if available – can begin.

Acute pancreatitis usually begins with pain in the upper abdomen that may last for a few days. The pain may be severe and may become constant – just in the abdomen – or it may reach to the back and other areas. It may be sudden and intense, or begin as a mild pain that gets worse when food is eaten. Someone with acute pancreatitis often looks and feels very sick. Other symptoms may include:

Severe cases may cause dehydration and low blood pressure. The heart, lungs, or kidneys may fail. If bleeding occurs in the pancreas, shock and sometimes even death follow.

Besides asking about a person’s medical history and doing a physical exam, a doctor will order a blood test to diagnose acute pancreatitis. During acute attacks, the blood contains at least three times more amylase and lipase than usual. Amylase and lipase are digestive enzymes formed in the pancreas. Changes may also occur in blood levels of glucose, calcium, magnesium, sodium, potassium, and bicarbonate. After the pancreas improves, these levels usually return to normal.

A doctor may also order an abdominal ultrasound to look for gallstones and a CT (computerized tomography) scan to look for inflammation or destruction of the pancreas. CT scans are also useful in locating pseudocysts.

Treatment depends on the severity of the attack. If no kidney or lung complications occur, acute pancreatitis usually improves on its own. Treatment, in general, is designed to support vital bodily functions and prevent complications. A hospital stay will be necessary so that fluids can be replaced intravenously.

If pancreatic pseudocysts occur and are considered large enough to interfere with the pancreas’s healing, your doctor may drain or surgically remove them.

Sometimes a person cannot stop vomiting and needs to have a tube placed in the stomach to remove fluid and air. In mild cases, a person may not eat for 3 or 4 days and instead may receive fluids and pain relievers through an IV (intravenous) line.

Before leaving the hospital, a person will be advised not to drink alcohol and not to eat large meals. After all signs of acute pancreatitis are gone, the doctor will try to decide what caused it in order to prevent future attacks. In some people, the cause of the attack is clear, but in others, more tests are needed.

Acute pancreatitis can cause breathing problems. Many people develop hypoxia, which means that cells and tissues are not receiving enough oxygen. Doctors treat hypoxia by giving oxygen through a face mask. Despite receiving oxygen, some people still experience lung failure and require a ventilator.

Sometimes a person cannot stop vomiting and needs to have a tube placed in the stomach to remove fluid and air. In mild cases, a person may not eat for 3 or 4 days and instead may receive fluids and pain relievers through an intravenous line.

If an infection develops, the doctor may prescribe antibiotics. Surgery may be needed for extensive infections. Surgery may also be necessary to find the source of bleeding, to rule out problems that resemble pancreatitis, or to remove severely damaged pancreatic tissue.

Acute pancreatitis can sometimes cause your kidneys to fail. If this happens, dialysis will be necessary to help your kidneys remove wastes from your blood.

After the gallstones are removed and inflammation goes away, the pancreas usually returns to normal. [Learn more about Gallstones.]

Damage from alcohol abuse may not appear for many years, and then a person may have a sudden attack of pancreatitis. In up to 70 percent of adult patients, chronic pancreatitis appears to be caused by alcoholism. This form is more common in men than in women and often develops between the ages of 30 and 40.

Some cases of chronic pancreatitis are idiopathic, meaning that the cause is unknown.

Other causes of chronic pancreatitis are congenital conditions such as pancreas divisum, cystic fibrosis, high levels of calcium in the blood (hypercalcemia), high levels of blood fats (hyperlipidemia or hypertriglyceridemia), some drugs, and certain autoimmune conditions.

Most people with chronic pancreatitis have abdominal pain, although some people have no pain at all. The pain may get worse when eating or drinking, spread to the back, or become constant and disabling. In certain cases, abdominal pain goes away as the condition advances, probably because the pancreas is no longer making digestive enzymes. Other symptoms include nausea, vomiting, weight loss, and fatty stools.

People with chronic disease often lose weight, even when their appetite and eating habits are normal. The weight loss occurs because the body does not secrete enough pancreatic enzymes to break down food, so nutrients are not absorbed normally. Poor digestion leads to excretion of fat, protein, and sugar into the stool. If the insulin-producing cells of the pancreas (islet cells) have been damaged, diabetes may also develop at this stage.

Diagnosis may be difficult, but new techniques can help. Pancreatic function tests help a doctor decide whether the pancreas is still making enough digestive enzymes. Using ultrasonic imaging, endoscopic retrograde cholangiopancreatography (ERCP) and CT scans, a doctor can see problems indicating chronic pancreatitis. Such problems include calcification of the pancreas, in which tissue hardens from deposits of insoluble calcium salts. In more advanced stages of the disease, when diabetes and malabsorption occur, a doctor can use a number of blood, urine, and stool tests to help diagnose chronic pancreatitis and to monitor its progression.

Relieving pain is the first step in treating chronic pancreatitis. The next step is to plan a diet that is high in carbohydrates and low in fat.

A doctor may prescribe pancreatic enzymes to take with meals if the pancreas does not secrete enough of its own. The enzymes should be taken with every meal to help the body digest food and regain some weight. Sometimes insulin or other drugs are needed to control blood glucose.

In some cases, surgery is needed to relieve pain. The surgery may involve draining an enlarged pancreatic duct or removing part of the pancreas.

For fewer and milder attacks, people with pancreatitis must stop drinking alcohol, stick to their prescribed diet, and take the proper medications.