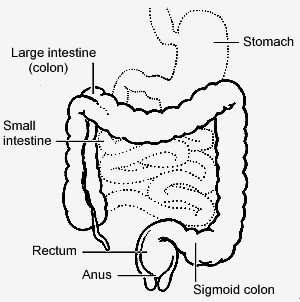 The inflammation makes the colon empty frequently, causing diarrhea. Ulcers form in places where the inflammation has killed the cells lining the colon; the ulcers bleed and produce pus.

Theories about what causes ulcerative colitis abound, but none have been proven. The most popular theory is that the body’s immune system reacts to a virus or a bacterium by causing ongoing inflammation in the intestinal wall.

What are the symptoms of ulcerative colitis?

The most common symptoms of ulcerative colitis are abdominal pain and bloody diarrhea. Patients also may experience:

About half of patients have mild symptoms. Others suffer frequent fever, bloody diarrhea, nausea, and severe abdominal cramps. Ulcerative colitis may also cause problems such as arthritis, inflammation of the eye, liver disease (hepatitis, cirrhosis, and primary sclerosing cholangitis), osteoporosis, skin rashes, and anemia. No one knows for sure why problems occur outside the colon. Scientists think these complications may occur when the immune system triggers inflammation in other parts of the body. Some of these problems go away when the colitis is treated.

How is ulcerative colitis diagnosed?

A thorough physical exam and a series of tests may be required to diagnose ulcerative colitis.

The doctor may do a colonoscopy or sigmoidoscopy. For either test, the doctor inserts an endoscope–a long, flexible, lighted tube connected to a computer and TV monitor–into the anus to see the inside of the colon and rectum. The doctor will be able to see any inflammation, bleeding, or ulcers on the colon wall. During the exam, the doctor may do a biopsy, which involves taking a sample of tissue from the lining of the colon to view with a microscope. A barium enema x-ray of the colon may also be required. This procedure involves filling the colon with barium, a chalky white solution. The barium shows up white on x-ray film, allowing the doctor a clear view of the colon, including any ulcers or other abnormalities that might be there.

What is the treatment for ulcerative colitis?

Some people whose symptoms are triggered by certain foods are able to control the symptoms by avoiding foods that upset their intestines, like highly seasoned foods, raw fruits and vegetables, or milk sugar (lactose). Each person may experience ulcerative colitis differently, so treatment is adjusted for each individual. Emotional and psychological support is important.

Some people have remissions–periods when the symptoms go away–that last for months or even years. However, most patients’ symptoms eventually return. This changing pattern of the disease means one cannot always tell when a treatment has helped. Some people with ulcerative colitis may need medical care for some time, with regular doctor visits to monitor the condition.

The goal of therapy is to induce and maintain remission, and to improve the quality of life for people with ulcerative colitis. Several types of drugs are available:

Other drugs may be given to relax the patient or to relieve pain, diarrhea, or infection.

Occasionally, symptoms are severe enough that the person must be hospitalized. For example, a person may have severe bleeding or severe diarrhea that causes dehydration. In such cases the doctor will try to stop diarrhea and loss of blood, fluids, and mineral salts. The patient may need a special diet, feeding through a vein, medications, or sometimes surgery.

About 25 percent of ulcerative colitis patients must eventually have their colons removed because of massive bleeding, severe illness, rupture of the colon, or risk of cancer. Sometimes the doctor will recommend removing the colon if medical treatment fails or if the side effects of corticosteroids or other drugs threaten the patient’s health.

Surgery to remove the colon and rectum, known as proctocolectomy, is followed by one of the following:

Not every operation is appropriate for every person. Which surgery to have depends on the severity of the disease and the patient’s needs, expectations, and lifestyle. People faced with this decision should get as much information as possible by talking to their doctors, to nurses who work with colon surgery patients (enterostomal therapists), and to other colon surgery patients. Patient advocacy organizations can direct people to support groups and other information resources. (See For More Information for the names of such organizations.)

Most people with ulcerative colitis will never need to have surgery. If surgery does become necessary, however, some people find comfort in knowing that after the surgery, the colitis is cured and most people go on to live normal, active lives.

Researchers are always looking for new treatments for ulcerative colitis. Therapies that are being tested for usefulness in treating the disease include

Is colon cancer a concern?

Sometimes precancerous changes occur in the cells lining the colon. These changes are called “dysplasia.” People who have dysplasia are more likely to develop cancer than those who do not. Doctors look for signs of dysplasia when doing a colonoscopy or sigmoidoscopy and when examining tissue removed during the test.

According to the 2002 updated guidelines for colon cancer screening, people who have had IBD throughout their colon for at least 8 years and those who have had IBD in only the left colon for 12 to 15 years should have a colonoscopy with biopsies every 1 to 2 years to check for dysplasia. Such screening has not been proven to reduce the risk of colon cancer,  but it may help identify cancer early should it develop. These guidelines were produced by an independent expert panel and endorsed by numerous organizations, including the American Cancer Society,  the American College of Gastroenterology,  the American Society of Colon and Rectal Surgeons, and the Crohn’s & Colitis Foundation of America Inc., among others.