A hiatal hernia is an anatomical abnormality in which part of the stomach protrudes through the diaphragm and up into the chest. Although hiatal hernias are present in approximately 15% of the population, they are associated with symptoms in only a minority of those afflicted. 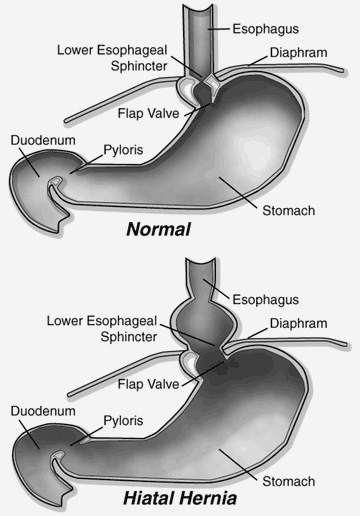 In individuals with hiatal hernias, the opening of the esophageal hiatus (hiatal opening) is larger than normal, and a portion of the upper stomach slips up or passes (herniates) through the hiatus and into the chest. Although hiatal hernias are occasionally seen in infants, where they probably have been present from birth, most hiatal hernias in adults are believed to have developed over many years.

Other potentially contributing factors include: 1) a permanent shortening of the esophagus (perhaps caused by inflammation and scarring from the reflux or regurgitation of stomach acid) which pulls the stomach up; and 2) an abnormally loose attachment of the esophagus to the diaphragm which allows the esophagus and stomach to slip upwards.

The vast majority of hiatal hernias are of the sliding type, and most of them are not associated with symptoms. The larger the hernia, the more likely it is to cause symptoms. When hiatal hernias produce symptoms, they almost always are those of gastroesophageal reflux disease (GERD) or its complications. This occurs because the formation of the hernia often interferes with the barrier (lower esophageal sphincter) that prevents acid from refluxing from the stomach into the esophagus. Additionally, it is known that patients with GERD are much more likely to have a hiatal hernia than individuals not afflicted by GERD. Thus, it is clear that hiatal hernias contribute to GERD. However, it is not clear if hiatal hernias alone can result in GERD. Since GERD occurs in the absence of a hiatal hernia, factors other than the presence of a hernia can cause GERD.

Normally, there are several mechanisms to prevent acid from flowing backwards (refluxing) up into the esophagus. One mechanism involves a band of esophageal muscle where the esophagus joins the stomach called the lower esophageal sphincter that remains contracted most of the time to prevent acid from refluxing or regurgitating. The sphincter only relaxes when food is swallowed, so the food can pass from the esophagus and into the stomach. The sphincter normally is attached firmly to the diaphragm in the hiatus, and the muscle of the diaphragm wraps around the sphincter. The muscle that wraps around the diaphragm augments the pressure of the contracted sphincter to further prevent reflux of acid.

When a hiatal hernia is present, two changes occur. First, the sphincter slides up into the chest while the diaphragm remains stationery. As a result, the pressure normally generated by the diaphragm overlying the sphincter and the pressure generated by the sphincter no longer overlap, and as a result, the total pressure at the gastro-esophageal junction decreases. Second, when the gastro- esophageal junction and stomach are pulled up into the chest with each swallow, the sharp angle where the esophagus joins the stomach becomes less sharp and the valve-like effect is lost. Both changes promote reflux of acid.

Hiatal hernias are diagnosed incidentally when an upper gastrointestinal x-ray or endoscopy is done during testing to determine the cause of upper gastrointestinal symptoms such as upper abdominal pain. On both the x-ray and endoscopy, the hiatal hernia appears as a separate “sac” lying between what is clearly the esophagus and what is clearly the stomach. This sac is delineated by the lower esophageal sphincter above and the diaphragm below. The hernia may only be visible during swallows, however.

Treatment of large para-esophageal hernias which cause symptoms requires surgery. During surgery, the stomach is pulled down into the abdomen, the esophageal hiatus is made smaller, and the esophagus is attached firmly to the diaphragm. This procedure restores the normal anatomy.

Since sliding hiatal hernias rarely cause problems themselves but rather contribute to acid reflux, the treatment for patients with hiatal hernias is usually the same as for the associated GERD. If the GERD is severe, complicated, or unresponsive to reasonable doses of medications, surgery often is performed. At the time of surgery, the hiatal hernia is eliminated in a manner similar to the repair of para-esophageal hernias. However, in addition, part of the upper stomach is wrapped around the lower sphincter to augment the pressure at the sphincter and further prevent acid reflux.