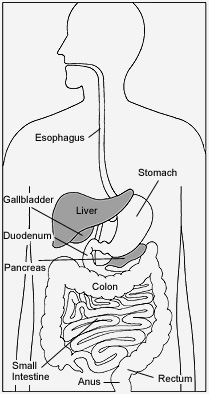 The two types of gallstones are cholesterol stones and pigment stones. Cholesterol stones are usually yellow-green and are made primarily of hardened cholesterol. They account for about 80 percent of gallstones. Pigment stones are small, dark stones made of bilirubin. Gallstones can be as small as a grain of sand or as large as a golf ball. The gallbladder can develop just one large stone, hundreds of tiny stones, or almost any combination.

The gallbladder and the ducts that carry bile and other digestive enzymes from the liver, gallbladder, and pancreas to the small intestine are called the biliary system.

Gallstones can block the normal flow of bile if they lodge in any of the ducts that carry bile from the liver to the small intestine. That includes the hepatic ducts, which carry bile out of the liver; the cystic duct, which takes bile to and from the gallbladder; and the common bile duct, which takes bile from the cystic and hepatic ducts to the small intestine. Bile trapped in these ducts can cause inflammation in the gallbladder, the ducts, or, rarely, the liver. Other ducts open into the common bile duct, including the pancreatic duct, which carries digestive enzymes out of the pancreas. If a gallstone blocks the opening to that duct, digestive enzymes can become trapped in the pancreas and cause an extremely painful inflammation called gallstone pancreatitis. 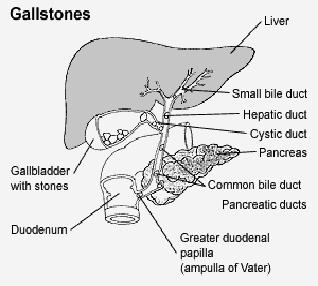 If any of these ducts remain blocked for a significant period of time, severe–possibly fatal–damage or infections can occur, affecting the gallbladder, liver, or pancreas. Warning signs of a serious problem are fever, jaundice, and persistent pain.

Scientists believe cholesterol stones form when bile contains too much cholesterol, too much bilirubin, or not enough bile salts, or when the gallbladder does not empty as it should for some other reason.

The cause of pigment stones is uncertain. They tend to develop in people who have cirrhosis, biliary tract infections, and hereditary blood disorders such as sickle cell anemia in which too much bilirubin is formed.

It is believed that the mere presence of gallstones may cause more gallstones to develop. However, other factors that contribute to gallstones have been identified, especially for cholesterol stones.

Who is at risk for gallstones?

Symptoms of gallstones are often called a gallstone “attack” because they occur suddenly. A typical attack can cause:

Other gallstone symptoms include:

People who also have the above and any of following symptoms should see a doctor right away:

Many people with gallstones have no symptoms. These patients are said to be asymptomatic, and these stones are called “silent stones.” They do not interfere in gallbladder, liver, or pancreas function and do not need treatment.

How are gallstones diagnosed?

Many gallstones, especially silent stones, are discovered by accident during tests for other problems. But when gallstones are suspected to be the cause of symptoms, the doctor is likely to do an ultrasound exam. Ultrasound uses sound waves to create images of organs. Sound waves are sent toward the gallbladder through a handheld device that a technician glides over the abdomen. The sound waves bounce off the gallbladder, liver, and other organs such as a pregnant uterus, and their echoes make electrical impulses that create a picture of the organ on a video monitor. If stones are present, the sound waves will bounce off them, too, showing their location. Ultrasound is the most sensitive and specific test for gallstones.

Other tests used in diagnosis include:

What is the treatment?

The most common operation is called laparoscopic cholecystectomy. For this operation, the surgeon makes several tiny incisions in the abdomen and inserts surgical instruments and a miniature video camera into the abdomen. The camera sends a magnified image from inside the body to a video monitor, giving the surgeon a close-up view of the organs and tissues. While watching the monitor, the surgeon uses the instruments to carefully separate the gallbladder from the liver, ducts, and other structures. Then the cystic duct is cut and the gallbladder removed through one of the small incisions.

Because the abdominal muscles are not cut during laparoscopic surgery, patients have less pain and fewer complications than they would have had after surgery using a large incision across the abdomen. Recovery usually involves only one night in the hospital, followed by several days of restricted activity at home.

If the surgeon discovers any obstacles to the laparoscopic procedure, such as infection or scarring from other operations, the operating team may have to switch to open surgery. In some cases, the obstacles are known before surgery, and an open surgery is planned. It is called “open” surgery because the surgeon has to make a 5- to 8-inch incision in the abdomen to remove the gallbladder. This is a major surgery and may require about a 2- to 7-day stay in the hospital and several more weeks at home to recover. Open surgery is required in about 5 percent of gallbladder operations.

The most common complication in gallbladder surgery is injury to the bile ducts. An injured common bile duct can leak bile and cause a painful and potentially dangerous infection. Mild injuries can sometimes be treated nonsurgically. Major injury, however, is more serious and requires additional surgery.

If gallstones are in the bile ducts, the physician (usually a gastroenterologist) may use endoscopic retrograde cholangiopancreatography (ERCP) to locate and remove them before or during the gallbladder surgery. In ERCP, the patient swallows an endoscope–a long, flexible, lighted tube connected to a computer and TV monitor. The doctor guides the endoscope through the stomach and into the small intestine. The doctor then injects a special dye that temporarily stains the ducts in the biliary system. Then the affected bile duct is located and an instrument on the endoscope is used to cut the duct. The stone is captured in a tiny basket and removed with the endoscope. Occasionally, a person who has had a cholecystectomy is diagnosed with a gallstone in the bile ducts weeks, months, or even years after the surgery. The two-step ERCP procedure is usually successful in removing the stone.

Nonsurgical approaches are used only in special situations – such as when a patient has a serious medical condition preventing surgery – and only for cholesterol stones. Stones usually recur after nonsurgical treatment.

To find more information on this topic, visit: